Spice up your life!

I’ve taken the plunge and I’d like to introduce a new man in my life… Meet Spice!

Spice is my new steed, standing at just 14.2, he’s quite a lot smaller than Cyryl in both height and frame. But he is exactly what I was looking for! He’s a 16 year old Irish Sports Horse, who, so far has been absolutely amazing!

I’m excited for our new journey together for many reasons. I feel very confident on Spice, probably more so already than I ever did on Cyryl. He’s a genuine all-rounder and so far we have hacked alone and in company and schooled. I’m yet to jump him, but every day I’m becoming more at ease with him, so I’m sure it won’t be long.

His lovely owner, Roisin, enjoys XC and SJ with him, which he excels at and I’m hoping one day I will be able to do this same! She’s riding him in the photo above.

Roisin used to regularly compete at Dressage too, but has focused more on her jumping over the last few years. Therefore, I’m hoping to bring him back to Dressage and hopefully even get out and compete over the winter. Perhaps I’ll reach Novice level, which has been my goal for a while.

So far, he’s been really lovely in the school. He’s very forward going, which I’m still trying to get used to, but I’m hoping that a few lessons will whip me in to shape and get me to relax and go with his forward movement, rather than brace myself against it. It’s a pleasure riding a horse who does what you ask, the first time you ask!!

Spice has been truly wonderful out hacking, we’ve encountered some super scary things so far, such as a bin lorry down a narrow track (why do they always pop up when you are on the most narrow lanes?!) and tractors with huge twirling machinery and his behaviour was impeccable. As was he when Roisin escorted me to ‘The Gallops’ – miles and miles of wide open farmer’s fields which you can canter around the edges of. It was quite daunting at first, especially being in such an open space with a horse I wasn’t used to, but he was truly amazing. He cantered at the speed that I asked him to, and stopped when I asked him to – what a dream! 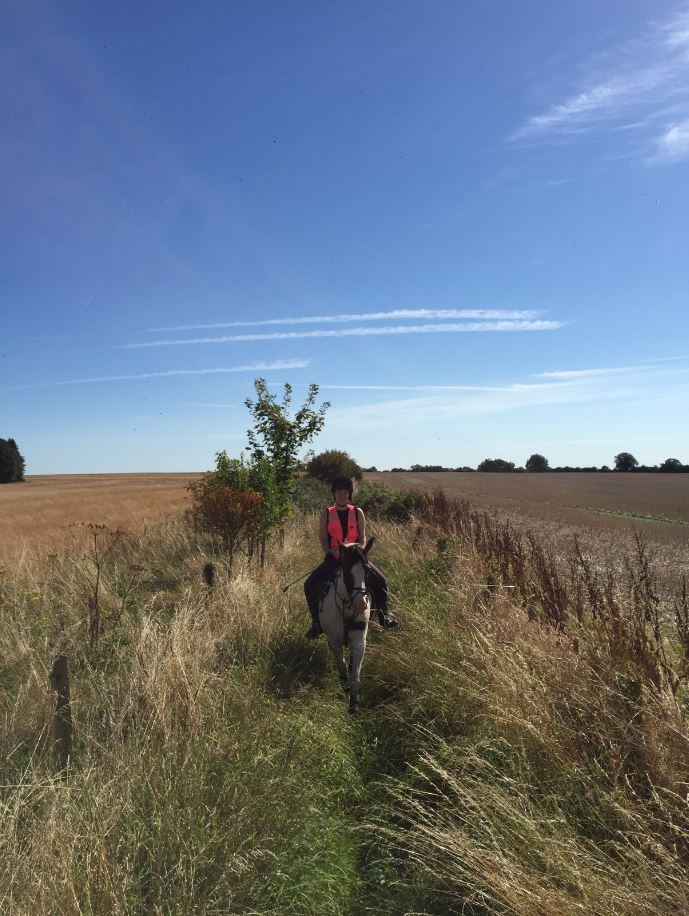 Another aspect that I’m really excited about is being more involved and enjoying more of a horsey lifestyle again. Cyryl was on full livery in the end, which meant that all I had to do was go up and ride. Obviously this has lots of perks and is a dreamy situation for a lot of horse owners, but I missed the bonding and daily care aspects. My new yard is a lot closer to home too, which has enabled me to ride before work several times already! He’s on DIY livery and I’m really enjoying the mucking out and daily care.

The yard is super cute, it’s really traditional and the hacking is to die for. I was gobsmacked when I hacked out through the woods, past the country pub and up a hill and all I could see for miles was unspoilt scenery! I don’t think I’ll be getting bored of that for a while (although I may miss being on a yard with wifi, a solarium and a working toilet!!).

Here’s to my new adventure with Mr Spicey, I can’t wait to get to know him better and enjoy our future together.