Recently I’ve become a bit obsessed with watching routine videos on YouTube. From getting ready routines, to make up routines, to cleaning routines. I watch them all! Thus far, I’ve been too scared to film a “my yard routine” so I thought I’d write one first and see how it goes!

Hooch is on livery Monday to Friday, which I’m really thankful for, as it means my time during the week after work can be spent on grooming, riding and generally bonding with Hooch, rather than on chores. However, at the weekend, we are DIY all the way.

Since we’ve been at the new yard, we’ve turned Hooch’s routine round, so he’s in at night, because there is so much grass and he’s laminitis prone. However, he doesn’t seem to mind as the new stables are huge! 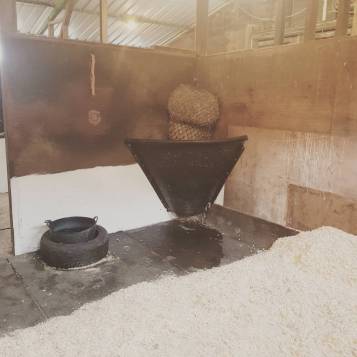 So, on a typical weekend with Hooch, I set my alarm for about 7.45am, actually earlier than I get up for work during the week! I won’t lie, I don’t bother with a shower or makeup, that happens when I get back home, often filthy dirty. I make a tea or coffee in my travel cup and take the 12 minute drive to the yard.

On arrival, the first thing I do is make Hooch his breakfast as he’s hungry. He has some chaff, some Cool & Collected nuts, a Biotin supplement and a CushCare supplement. And carrots, apples or both if he’s lucky. Once he’s finished breakfast, I’ll give him a quick flick off if he needs it, a bit of fly spray and off he goes to the field to chill out with his friends for the day.

I go back to perform the daily maid’s service to his bedroom. Out comes the dirty breakfast and dinner buckets and his play ball. They all get rinsed off and put back in the feed room, along with his empty haynets.

Next is the mucking out and the weekend is for a big bed change. Hooch is on a combination of wood pellets as a base layer, with lots of shavings on top. I’ll take out all the dirty, then flick up all the shavings and dig out all the wet bed underneath. The rubber mats can then air off while I empty, clean and refill his water bucket and dig out any old hay from the bottom of the Haybar. Then I’ll top the bed up.

The wood pellets are strange things – you pour them in to the wheelbarrow, I usually use two 15kg bags as a top-up and then hose them down to wet them! They swell and eventually make a powdery base layer that is seriously absorbent. You can use them alone, but I prefer them with shavings over the top as I think it’s more comfortable should the horse want to lay down.

Next I’ll make haynets. If I’m in no hurry, I’ll make enough for the whole weekend in one go to save time. I’ll put one in a bin of water to soak until the afternoon. Next I’ll make his dinner for the evening and breakfast for the next day and refill his treat ball. By the time I’ve done all this, the rubber mats in the stable will be perfectly dry, so I’ll put the new wood pellets and shavings down and finish off the stable. By this time, it’s mid-morning, so I’ll head home and usually have a coffee and cake, or sometimes a cooked breakfast with Ben!

I’ll head back to the yard at about 4pm, although this will have to alter now the dark nights are coming in fast. I’ll pull the soaking haynet out of the bucket and hang it up to drain. Next I’ll get my tack and grooming kit from the tack room, grabbing a carrot or treat on the way. I will hang the drained haynet Hooch’s stable and walk out to the field to bring him in.

A good groom is one of my favourite parts of the routine. I love making Hooch look good for a ride and he really enjoys the fuss while he has a munch on the hay. He’s usually really relaxed after a day in the field.

At the weekends I like to hack for hours. Or since we’ve been at the new yard, I’ve been riding in one of the fields which has been amazing. I think it’s really useful to school in big open spaces like fields. If your horse will listen to you and concentrate in the middle of a huge open space, you are on to something! It’s so beneficial for hacking and ensuring you are always in control.

After riding, I’ll sponge Hooch off, if he needs it, give him a quick groom and pick out his feet and then when he is cool and settled, he has dinner. Dinner is the same as breakfast, but with a Pink Powder supplement instead of the earlier ones. If I’m in the mood, I might give my tack or boots a quick clean in the tack room. I usually do this if there is someone around to chat to, or if I’m not too hungry! Then I’ll tidy down and the last thing I’ll do is pop his treat ball in to the stable, to play with during the evening.

On Sunday, the entire process is repeated. Sometimes I’ll ride in the morning or sometimes something exciting like a clinic or competition will be taking place, but this is generally the routine that I’ll follow through until next Spring, when the horses will turn around for Summer. Having written it all down, I have to say I have major respect for the people on DIY every day and also to the people with more then one horse!

What does everyone’s yard routine look like at the moment? Are they similar, or completely different to mine? I’d love to know!

Who's a pretty boy? 🥰🐴❣
The Hoocher enjoyed an afternoon lunge session in the sun 👌🏼☀️ I'm trying to lunge with the pessoa a couple of times a week to increase his fitness and muscle across his back 💪🏻
We are looking forward to Mummy Katie finishing some projects and having some pony fun with us over the next few weeks 😁🤗🐴 This photo was taken a couple of days ago while we were having some fun in the sun!
We had a little play time this morning! We haven't jumped for months, so kept them small. But Hoochy absolutely loved it 😁 Must vow to be braver and remember how fun getting off the ground can be 👍🏼
I got snapped while schooling 📸 Hooch has felt particularly supple and willing since his back treatment 👌🏼 we've even had some canter outline... shock horror!!
Look at this piglet snout 🐽 I love love love kissing Hooch's velvet nose 💋 . We had a lunging session tonight in the evening sun... Such a good boy again 👌🏼
%d bloggers like this: